The Estate Plan Phil Jackson Wished He Had 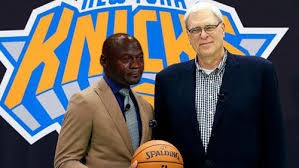 Today has been a lovely day. In fact, I’m having a hard time containing my smile right now. After three years of futility, my beloved New York Knicks have finally decided to part ways with the Zen Master – Phil Jackson.

In case you aren’t a Knicks fan, Phil Jackson, the basketball coach who coached Michael Jordan, Scottie Pippen, Kobe Bryant, Shaquille O’Neal, among other hall of famers, to NBA Championships, was hired as the Knicks President three years ago by the Knicks owner, James Dolan. Back then we were all hopeful that the Zen Master would guide our team back to respectability.

Alas, it was not to be. Jackson compiled a record of 80-166 in his three years as President. He was an absolute train wreck (I’m being kind) and infuriating to follow as a fan. His best quality was that he was not Isiah Thomas, but that’s another story.

All of this having been said, Jackson’s leaving reminds me of an estate planning technique that many of my clients have been asking me about – The Revocable Living Trust (RLT). Phil Jackson will probably want to have owned his New York property in a RLT, assuming he’s moving back to Montana (or Los Angeles?).

Let’s talk about trusts. I’ve heard a trust described as a contract between various parties to benefit other parties, but I find definitions like that hard to conceptualize.

Instead, thanks to my Partner Erin Calpin, I like to think about a trust as a box. Whenever there is a box, there are people involved with the box. There’s the person (or people – but I’m going to use the singular for simplicity) who creates the box – that person is called the Grantor or the Settlor. There’s the person who manages the box, that person is the Trustee. And then there is the best role to play, the person who benefits from what’s in the box, that’s the beneficiary.

If you create a RLT there is no tax benefit because for all intents and purposes the box is you, i.e., the assets can be managed just as easily as if they were in your own name. A RLT also does not have a separate Social Security Number. You can put things (or assets) in the box, you can take things out of the box. You can chuck the box entirely.

You must be wondering – if there is no tax advantage, then why would you want to create this magical box?

Great question! There are three main reasons to create the RLT. The first has to do with Incapacity. Specifically, as mentioned above, you are all three roles (Grantor/Trustee/Beneficiary) for the RLT. But, if you become incapacitated, your “successor trustee” can easily step into your shoes and manage your assets for you. Some banks would much rather your assets be in a RLT and your successor trustee step into your shoes to manage those assets then be forced to use a Power of Attorney. If you have ever had a Power of Attorney rejected from a bank you know what I’m talking about.

The second reason has to do with Privacy. A Will is a public document. You can easily find David Bowie’s or James Gandolfini’s will, because their wills are public documents. However, anything mentioned in a RLT is private. No one will gain access to the contents of the Trust because it’s private.

The third reason to create a RLT brings us back to our good friend Phil Jackson. The third reason to have a RLT is to avoid the probate process. Without getting into a much longer digression, anything in your individual name (that does not have a beneficiary form) will transfer to your beneficiaries through your Will. In order to probate (or to use) the will your executor has to qualify as the executor and then go through the probate process to make the necessary transfers. If all of your assets are in New Jersey, then it’s not that difficult.

But imagine this scenario. Phil Jackson names Jeannie Buss as his executrix. And Phil has property in Montana, New York and Los Angeles, and everything is owned in his individual name. When Phil dies, Jeannie has to qualify in Montana, New York and Los Angeles Surrogates Courts, paying the filing fees in each state (perhaps even having to make an appearance in each location) in order to transfer all of these homes to Phil’s beneficiaries. However, if Phil had his properties owned in the name of his RLT, Jeannie could deal with all of Phil’s properties in the comfort of her office at the Staples Center.

Similarly, if you live in New Jersey (New York is an altogether different story, we recommend all of our New York clients have RLTs) and you have properties in other states, you’re going to want to own them in the name of your Revocable Living Trust. You might also want a RLT for incapacity purposes, but especially if you own multiple properties in multiple states.