The Last Will & Testament of Alfred Nobel 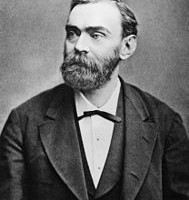 The esteemed Nobel Prize is awarded only to those who show excellence in academics, science and cultural studies. Some of the most famous recipients include Albert Einstein, Martin Luther King Junior, Marie Curie & Co. and Mother Teresa. Additionally, the Red Cross has received more Nobel Prizes than any other person or organization. However, what you probably don’t know about the Nobel Prize is that it was created in Alfred Nobel’s last will and testament.

Alfred Nobel was a Swedish chemist and inventor who invented dynamite in the mid-late 1800s. By creating an explosive that was safer and easier to handle than nitroglycerin, Nobel quickly amassed a sizable fortune. Additionally, Nobel made wise investments in oil businesses owned by his brothers and accumulated a total of 350 patents, further increasing is already substantial wealth.

When Alfred Nobel died in 1896 in Italy, his surviving family was shocked at his Will. Instead of leaving any assets to his nephews (he had no children of his own), Nobel stipulated that his fortune should be used to award prizes to “those who, during the preceding year, shall have conferred the greatest benefit on mankind.” As a result, approximately $265 million went towards the creation of the Nobel Foundation.

In Nobel’s will, he explains that the prizes are to be split into five equal parts in the following areas:

Alfred Nobel’s last Will and testament is a perfect example of how a Will can affect lives after death — the world is constantly affected by his last wishes. It also shows that as a testator, you have a choice about how you want your estate and assets disposed of after your passing. If would like to discuss your estate plan with an experienced attorney in Union County or Hunterdon County of New Jersey, contact Alec Borenstein, Esq., at alec@bmcestateplanning.com or call 908-236-6457 today.